In his book Evil by design, Chris Nodder composes the savoir-faire in design. As a human-centered designer, he suggests a guide based on the seven deadly sins, in order to make a product attractive and desirable to get. This week’s reading assignment is the chapter “Envy” and our fellow student is going to present his master’s project in this context.

A very successful example of how envy works towards a marketing strategy is Tom Sawyer’s attitude in Mark Twain’s The Adventures of Tom Sawyer, as it is highlighted in the introduction of  Evil by design. The boy managed to present his dull and strenuous task as appealing and fun instead and finally his friends were aspired to get it done. Behaviorism and conditional psychology are considerably important parameters when it comes to designing a product or even a strategy to promote it. According to the author, the stages to make a product desirable include secrecy, scarcity, identity, aesthetics and functionality.

The manufacturing of envy involves the approach of “full-on destructive envy”, which assures that the item is a must-have. This is a remarkable technique of attracting buyers and users to a product/service promoted. Since our fellow student’s project mainly targets a specific clientele (for children), I can picture how the word-of-mouth could work in this case.

In general, this chapter reminded me of Pavlov’s dogs and although this experiment is not mentioned with regards to rewards and payments, I think it would be an outstanding fit. However, Nodder mentions reinforcement on a later chapter (Greed), that deals with the gaming industry and gambling in particular.

This week we were assigned readings from our fellow student, who is looking at comments found online (news articles and social media).

On the one hand, Suler (The Online Disinhibition Effect) focuses on the luxury of the anonymity that is offered online and engages individuals to share their opinion in a comment format. On the other hand, Reagle  (Reading the Comments) puts up with the toxicity in comments sections. Bringing these views together, this video approaches the comments discussion from a design/interface perspective.

As an everyday life observer, I would like to point out the qualitative difference of comments posted on social media or on news articles. In both cases, I can see the intention behind the comments made, this is why categorizing the comments had been a brilliant idea!

However, is it the perception of anonymity that encourages participation through comments, or the diverse nature of commitment that commenting implies?

In other words, when submitting a comment on an article, one has to be a member/register a username; if there are replies to comments, the authors get notified. This also happens in social media, with the main difference that notifications refer to replies or other comments/tags made by familiar persons (friend list). So, when commenting on a news article, the main intention would be to be heard, share an opinion or even direct the audience towards relevant discussions that are interest-driven in some cases.

How easy and appealing is it to comment online?

I recently noticed that while reading an article on Facebook, the cursor flashes in the comment field, engaging the reader to comment. Personally, I see bigger potential in comment fields content, evolving mimics of the post field content or even of search engines content and databases. Lately, I discovered this interesting tool useful to researchers who would like to explore the FAQ. I could not help myself but try it with the “comments on” search and here’s what I got: 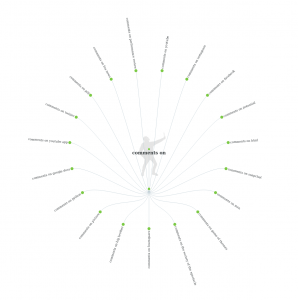 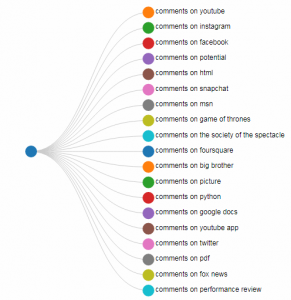 It seems that people are very interested to read through comments on various topics for their own reasons.

After having completed the readings and watched the video, my personal conclusion about online comments consists of the following attitudes and phenomena:

All in all, I wonder, is this an identical replica of democracy represented in online participatory cultures? To be honest, it is not very progressive. Is this happening in the real world too? Reminds me of my childhood…

I graduated from a very strict high school (catholic) where students had specific dress code restrictions. Apart from being encouraged to wear decent and clean clothes at all times, we were not allowed to wear T-shirts or sweaters with stamps representing textual statements, music bands, football clubs etc. It is obvious that the school authorities wanted to avoid conflicts and debates among students and limiting youth fan cultures had been their respectful way to do so. Certainly, freedom of speech was highly encouraged, so we could talk about the  football team we support or our favorite band. Does this mean that our comments were invisible?

By the way, you guys let me down, I wore my “JUSTIN FOREVER” T-shirt in class today and there was no comment from any of you

Would you comment if I made this statement online?

Krista Tippett interviews danah boyd about the online worlds of teenagers in the context of communication and social interaction. Danah’s self-introduction in this podcast is followed by the striking discussion about the spirituality of social media and the meditating effect of blogging, twenty years ago, when technology and interfaces had not been mature enough to engage the “blogging activity”. Back in 1997, danah narrates, a simple web page had been the medium of keeping track of events and practicing everyday life. Later on, “digital diaries” gradually took the shape of blogs. As the transition era has begun since the Internet made its appearance, every generation involved perceives the usability and the profits or the menaces of technology in different ways. For instance, younger individuals take most of the technological achievements for granted.

Kids wonder how the internet was found!

Although some of us have experienced the long waiting in front of our computer screens watching anxiously the bright data package exchange between the grayish computers and the yellowish phone, annoyed by the dial-up beeping, children and teenagers today consider our times of digital suffering to be a bad fiction, parody-like production!

If you have the time to watch the video about teens’ reactions to the internet of the 90s and read the comments, as well, you would probably notice that most people arguing that kids used to hang out more, play outdoors and interact in person. Nowadays, according to danah, children should be supervised when playing at the park and in some countries it is illegal to leave ones kids unattended in public outdoors space.

Internet mirrors society and magnifies any malfunctioning structures of the real world, which should be redefined before getting transferred online.

Nevertheless, real world dangers have been transferred in our virtual worlds as well; cyber-bullying would not have existed if bullying had been eliminated in the first place. On the contrary, internet has catapulted the drama, by encouraging behaviors such as self-bullying, because of the need for attention among younger individuals.

I partly disagree with the fact that children should be warned about the long-term consequences of publicly expressing themselves on social media, by fear that their future employers would not hire them. For being young and spontaneous? This would be a great opportunity to prepare the youth to deal with society, its structures and transparent rules.

I am not a parent yet, but I believe that family is the first bond and gate towards social structures, so encouraging young people to develop their interpersonal skills is very important. In addition, past is related to our present and helps form our future; it is significant to remind children to be proud of their achievements and learn from their mistakes. Undoubtedly, human cultures and identities are emerging within the virtual era that gives plenty of perspectives in matters of information and communication.

There has been a remarkable point on the podcast, concerning the manipulation of spelling and the increase of textualized interactions, both deriving from practicing social media and introduced by young people. Acronyms and abbreviations have replaced whole phrases, in order to type less and navigate/multitask more. Inspired by early chatters and then gamers, this trend expanded through communities and got rapidly popular among students. It seems to be a miracle how technology shapes the mechanisms of expression leading creativity into a new dimension.

Making connections and be part of a network apparently does not mean that we could bring all our contacts into our profile and grow a network where all family, friends and colleagues interact with each other. NO! A network should be interest-driven and have a primary goal to be formed. It could be an expectation to get an improved social status, a better job and new friends. And by all means, that network should reflect our popularity and participatory skills, so no more skipped posts, likes and comments if we want to succeed. Furthermore, it could be an alternative network that we can start building up when we get fed up with our old one. Golden had been the age of nokia mobile phones and their innovative settings of registering one’s contacts into different groups with different roles assigned; ringtones and blocking content permissions. This privilege keeps on being offered twenty years later in every social interface.

No offence, I understand that some people get tired of the urban daily life and need a break; personally, I respect my own privacy as others’ and I consider it to be a basic need, but not to the extend that I would isolate my contacts, or ditch them for the sake of class mobility.

Some of the most sensitive and fragile issues concerning humanity have been simplified and underestimated. Same time we worry about how the new generations could adopt morality and appreciate the balance in values and intentions.

The book Participatory Culture in a Networked Era is a great collective work, pointing out the digital awareness about forming participatory cultures. Today’s  short discussion topics deal with the context of chapters 4&5:

With reference to participatory forms of education, cognitive scientists and behaviorists who research the process of learning and knowledge assimilation, construct theories and methods that end up to be examined and applied by educators, media theorists and educational software designers.

Why learning in the real world is less attractive/effective than the one taking place in a virtual or simulated environment?

First of all, the diversity of learners is the key to constitute well-balanced communities where students can interact and share knowledge. Along with the possibility to create their “digital selves”, their area of interests defines the subject of studies, improving the learning process, while standing for motivation and engagement. Furthermore, the pedagogical methods based on gaming and problem solving are likely to develop competition and offer a pleasant, entertaining experience towards well-formulated learning goals. Being a lifelong learning supporter, I would confess that my attention is mostly captivated when I interact with readings that represent my interests. In this context, I believe that learners may contribute to knowledge sharing through creative collaboration within networked learning. In other words, what if students and researchers edit Wikipedia entries related to their fields of interests, instead of debating on the accuracy of information found there or in Google results. At this point, I would like to refer to the misunderstandings concerning the free labor.

Why fans are engaged to sell out their creativity?

Well, in most cases media/internet users are not aware of the mechanisms of data extraction neither of the value of information. Students and researchers, activists and fans are the widest communities to be taken advantage of, along with the needs and trends of the current marketspace.

Wouldn’t it be better and healthier to adopt ethical policies in the networked era?

Unfortunately, the digitization of information made it easy for us to share, ignoring the value of the shared content. This is why we should be more aware of the meaningfulness of participatory culture.